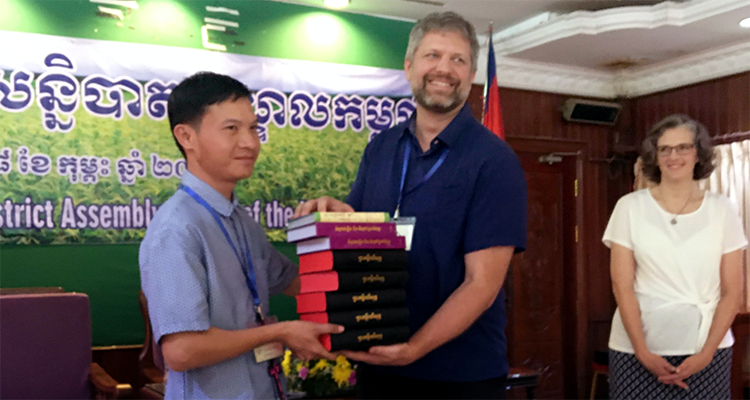 This story is a first-hand account from Kevin Campbell-White, district superintendent for Cambodia, on how the district is working to equip its churches with Bibles.

This past December, the Cambodia District Advisory Board presented a need, sharing that most of their churches had only two Bibles. These churches have anywhere from 15 to over 100 people each. Because a Bible costs more than a typical day’s wage, many church members felt they had to choose: feed their family or buy a Bible.

As they continued to explain their need, thoughts ran through my head. “The church in Cambodia is growing faster than any other area in Southeast Asia and they only have two Bibles per church?”

Our field strategy coordinator was also at the meeting and quickly confirmed what I already knew to be true… our field was holding funds designated for the purchase of Bibles, just waiting for someone to ask for it. So I shared with these pastors that we would be purchasing as many Bibles as we could afford and distributing them to each church at our upcoming district assembly. Not only that, but I also promised them that we would continue to find ways to supply them with as many Bibles as they needed, so they could give them away to other people and villages where they were sharing the Gospel.

Normally Bibles in Khmer (the most common language in Cambodia) cost $15 each, but one of our pastors was able to get Bibles for $5 each. The churches also expressed a need for hymnals. Soon Bibles, hymnals, and children’s Bible storybooks began to show up at our district office. Everything the local Bible Society had in stock arrived first.

Over the next week or so, a motorcycle arrived with a couple of boxes from another province a few hours away, and several tuk-tuks (a type of local transport) arrived with still more Bibles.

When it was all said and done, we had to rent a bus to take boxes containing 310 Bibles, 62 children’s Bible storybooks, and 124 hymnals, in addition to other supplies, from Phnom Penh to the district assembly in Siem Reap. Each church received five Bibles, two hymnals, and one children’s Bible.

When I challenged the assembly to make disciples so that I would have to buy them twice as many Bibles next year, one of the delegates took it to heart. Later that evening, one of the guards at the hotel where the assembly was being held came up to our mission team and thanked us for his new Bible! He told us that he was a Christian but didn’t have a Bible, so one of our pastors gave him one of their precious few Bibles so he could share the Good News in his village.

--Church of the Nazarene Asia-Pacific