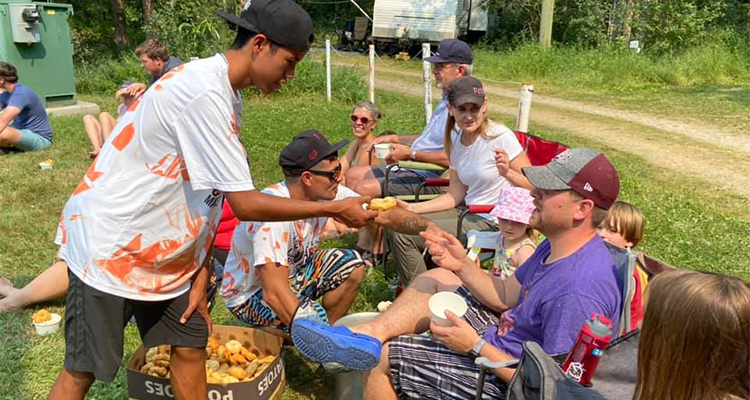 The Canada West District made its annual Kids Reaching Kids fundraiser tangible through a “Lunch and Learn” event about a First Nations (indigenous) culture at its family camp in August.

The Canada West District’s fundraising efforts this year supported the translation of the Journey of Grace children’s materials into other languages. During their family camp, they used the Grace character from the free Journey of Grace Vacation Bible School curriculum to portray the fundraiser’s progress.

Each year at family camp, the district unveils its fundraiser, and members begin to chip away at the goal. Children bring toy wagons to transport and sell items at campsites, including firewood, decorative rocks, and corn on the cob, to raise funds. The children needed to raise $2,000 to attend the “Lunch and Learn” event as a prize. They met that goal, and in total they’ve now raised more than $4,500.

Since the project funds support the creation of resources for different cultures, district leaders wanted the children to learn about the denomination’s multicultural connections.

“We connected to [the First Nations culture] because of course the children are raising money for funds for a different culture, and we wanted them to experience a different culture but a culture that’s relevant to us in Canada,” said Sheri Lynn Martin, the children’s ministry coordinator for the Canada West District.

The district’s missions vice president, Penny Ure, comes from a First Nations background and has many foster children who also come from that background. The event featured traditional clothing, food, language lessons, a song, and a children’s story time.

The book read during the story time was written about a child’s experience at an Indian Residential School. The residential schools have been at the forefront of conversations in Canada this summer following the discovery of thousands of unmarked graves at the former school sites.

“It was a children’s book, so it’s a little bit more gentle,” Martin said. “People were just shocked at what had happened, and you could see them thinking about how things needed to change.”

Martin thinks it was helpful for the children to connect the offering to a nearby specific culture.

She hopes other churches will help connect their children to the diverse nature of the Church of the Nazarene and teach them about different cultures that exist both locally and globally.

“It’s a really good connection to go from, ‘We’re trying to raise money for this translated material for the kids,’ into ‘Here’s a culture and some differences and here is why we need to help have material that fits their culture as well,’” Martin said.