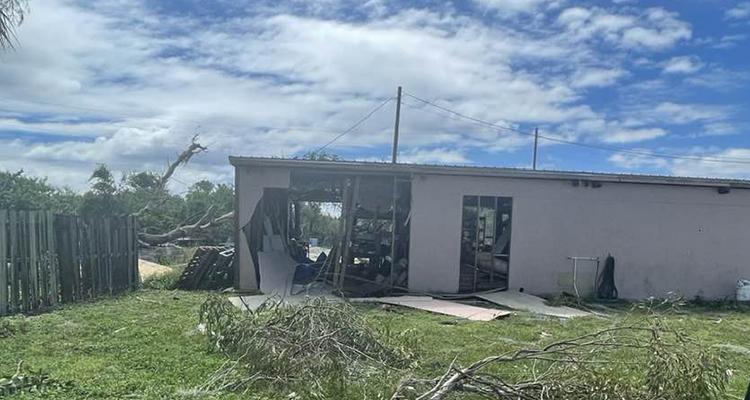 Hurricane Ian, one of the most powerful storms recorded in the United States, made landfall in Florida on 28 September as a Category 4 storm with sustained wind speeds up to 155 mph (250 km per hour), a day after hitting Cuba.

As of 6 October, more than 100 people were killed across the storm’s path, which later moved back out to sea before making landfall again in South Carolina as a Category 1 storm on 30 September. Thousands of people in Florida were left stranded by floodwaters.

Across Florida, several Nazarene churches and pastors’ homes sustained some building damage, and one pastor was evacuated from her apartment as floodwaters rose. At the Nazarene campground in Lake Placid, the storm caused serious damage to mature trees, power lines, water pipes, windows, roofing, doors, and even the walls of a maintenance building.

Nazarenes are acting in compassion to help their communities and neighborhoods. Even before the storm, churches organized people to fill sandbags, help neighbors board up their homes, serve in local storm shelters, and open church buildings as shelters.

Nazarene disaster response teams and trailers on location in Florida helped distribute tarps and clean debris where roads were passable, and some churches were providing meals to anyone in need of food. Crisis Care Kits have also been sent to Hertz Stadium in Fort Myers, where evacuees are housed.

Brian Wilson, superintendent for the Southern Florida District, said that caring for people in the hardest-hit communities is a top priority.

“Our primary concern is for the lives of residents in these areas, and I am so proud of our churches that have been reaching out and serving and ministering to those who are hurting, having lost family members and/or material possessions,” Wilson said.

Hurricane Ian comes on the heels of Hurricane Fiona, which caused destruction across the Caribbean, including Puerto Rico, where more than 100,000 people are still without power.

Please pray for those facing the devastation left by the storm across the United States and Cuba, especially those who have lost loved ones and homes. Pray for those who are still cut off from rescue aid and those without power. Pray for the swift and safe delivery of supplies, including shelters, food, and medicine. Pray for those who are most vulnerable, including senior adults, individuals with disabilities, and people living in poverty. Pray for church leaders and churches responding to the needs around them. To send a prayer or note of encouragement, go to ncm.org/pray.

Churches and individuals around the world can provide support through the Hurricane Ian Response Fund. Donations will be used for immediate needs, including shelter, clean water, food, and medical supplies, as well as long-term needs in the months and years ahead.

For any other country, give through your local church or district, designating your gift to the Hurricane Ian Response Fund.