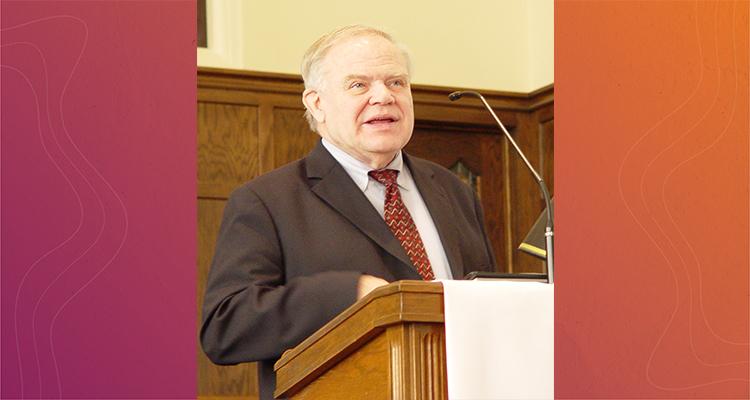 Paul Merritt Bassett, 86, of Overland Park, Kansas, passed away 7 May 2022. He was a retired minister and professor at Nazarene Theological Seminary for over 35 years.

Paul Merritt Bassett was born 28 May 1935 to Paul Gardner and Ruth Bassett in Lima, Ohio. His father was a Nazarene minister and a district educator. After graduating high school, Paul Merritt followed in his father’s footsteps by attending Olivet Nazarene University for his undergraduate work.

He would graduate from Olivet in 1957 with a Bachelor of Arts in Ministry. He continued his studies, earning a Master of Divinity from Duke Divinity School. He studied experimental psychology at Ohio State University and finally earned his doctorate from Duke University in 1967.

“Paul Bassett's sequence of courses covered the entire arc of Christian history from the Early Church to the Twentieth Century, reflecting his firm conviction that the entire Christian tradition embodied in the Eastern and Western churches was relevant to John Wesley's spiritual and theological heirs,” said Stan Ingersol, Nazarene historian and former Church of the Nazarene Archives manager. “Similarly, he insisted that interest in Christian holiness should never be demoted to the peculiar passion of some sect; rather, entire devotement to God should be understood as a central theme in the history of Christian spirituality. We participate in a wide church, he insisted, not a narrow one."

Alex Deasley, NTS professor emeritus, shared a reflection during Bassett’s Valedictory Chapel prior to his retirement in 2004.

“I quickly realized that he was not merely in the Church of the Nazarene; the Church of the Nazarene was also in him,” Deasley said. “It is this living heritage that he has passed on to 35 generations of NTS students. However, his commitment to his own church has not blinded him to the fact that he belongs to the ‘one, holy, catholic and apostolic church;’ and that through the former, he belongs to the latter.”

Although Paul retired from full-time professorship in 2004, he continued to teach courses in the Master of Divinity curriculum at NTS.

Paul was preceded in death by his parents and brother and sister. He is survived by a sister; his wife, Pearl; daughters, Emilie Taggart and Anita Zakarian; son, Paul Stephan Merritt; six grandchildren, and one great-grandchild.

A memorial service will be held 11 June 2022 at 10 a.m. at Overland Park Church of the Nazarene, followed by a luncheon and time to share memories.