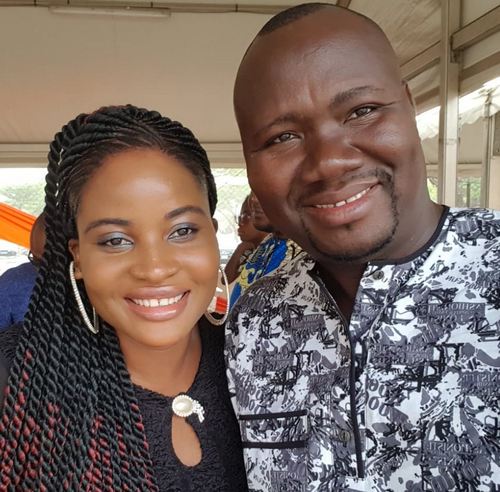 Moise Toumoudagou is married to Marthe and is the father of Evelyne, Manasseh and Ebenezer.

As a young man, Moise left Benin for the Ivory Coast, accompanied by his two brothers Norbert and Samson, and they settled in a village 44 km west of Abidjan.

It was in this small community that the three brothers became acquainted with the Church of the Nazarene.  Soon after the three brothers stated attending  this church, they gave their lives to the Lord Jesus Christ.  After a joyful experience of entire sanctification, they were given important roles in this little church.  Moise became the worship leader and the Sunday School instructor.

A few months later, Moses set up a prayer cell in Kodiakro in a farm of workers composed mostly of planters and laborers.  The new church grew very quickly and reached a large number of faithful members. But against all odds, Moses put an end to his adventure in Côte d'Ivoire and returned hastily to Benin following their older brother Norbert who had already preceded them a few months before.

On his return, Moses and his younger brother Samson, chose to stay in Cotonou where they undertook working as motorcycle taxis. It was only during this time that his call to become Pastor was confirmed. But there was not a Nazarene church in Benin to minister in. Timidly, he brought together some of his friends to begin a comprehensive Bible study around a book entitled "Holiness for All."

The small group in Cotonou was not yet well established when the first missionary couple, Rev. Gregory and Amy Crofford were sent from Côte d'Ivoire to Benin. The ministry in Benin took a new and more serious and more organized direction under the leadership of Dr. Crofford.  Moise and his friends enrolled at the IBN (Nazarene Bible Institute) being mentored in the exciting leadership of Dr. Crofford. It was then that the young Moise became the first Beninese pastor of the first Church of the Nazarene taking over the church directly from Crofford in Cotonou.

At this level of responsibility he was influenced by the leadership of Rev. Mark Louw  then FSC from West Africa Field. He trusted him and gave him some countries for the coordination of ministry. God blessed the leadership of his servant through the church planting movement that affected the Sahelian countries of Benin, Togo, and Niger.

In 2012, Rev. Daniel GOMIS was named FSC of the West Africa Field and called on Moise to be his assistant and to coordinate the French speaking countries. This five-year responsibility was five years of training under the mentorship and influence of Rev. Gomis. It was also five years of training in specific areas, five years of leadership development. Five years of personal development and especially years when the Lord continued his work of transformation in the life of his servant. There was particular emphasis placed on discipleship formation through community gathersings and the sending of indigenous missionaries to neighboring countries.

On December 1st, 2017, Pastor Moïse was appointed FSC of the Africa West Field. This responsibility led him to move with his family to Accra, Ghana where he has resided since March 2018.  Today, he places a special emphasis on the Axis Strategy; an approach to the development of the Sahel and Coastal routes of West Africa. The axes strategy has four key objectives: (1)Mobilize the church, (2) Create Visibility, (3) Impact community, (4) Attraction of new believers.

Moise was born in Cobly and was raised in Tanguiéta, Benin. He was introduced to the Church of the Nazarene in Ivory Coast in Amanikro where the Lord filled his life with His love and power. He began preaching and pastoring in Cotonou, Benin and became an ordained elder in the Church of the Nazarene.  As Moise continued to mature in leadership positions, he appointed as the District Superintendent of the Benin/Togo District on October 05, 2005.

After serving under the vision and leadership of the (then) Africa West Field Strategy Coordinator, Dr. GOMIS, he was called to serve as FSC of the West African Field.

Marthe was born and raised  in Parakou, Benin, where she completed her studies with a Baccalaureate B in 2016. Martha gave her life to Jesus Christ in 2012 shortly before her engagement to Moise.  They were married on October 07, 2017.

The Lord has given them three children, Ebenezer, Manasseh and Evelyne. They are a blessed family of God, happy and fulfilled. Our riches come from regular and authentic worship, praise to the Lord, crowned by a life of prayer. Martha loves children where she intends to develop a full ministry.

They enjoy taking walks together and playing and dancing with children.