Baskets of Love 'overflow' during times of crisis in Costa Rica

Baskets of Love 'overflow' during times of crisis in Costa Rica 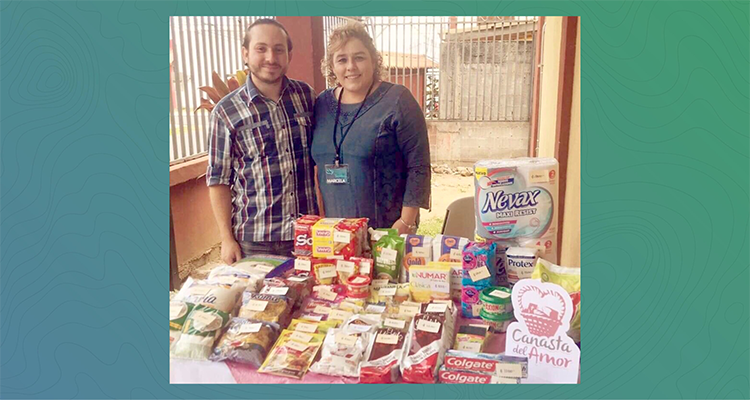 Iglesia del Nazareno de Coronado began the year 2020 with great expectations. Even in the middle of the pandemic, God's plans were much bigger than they thought as the church more than doubled its normal output of baskets of love.

The ministry called La Canasta del Amor (The Basket of Love) motivates the church to bring items or donate money to purchase items for basic needs in the home and make baskets, which are then delivered to families in need.

Church Board member, Priscilla Guevara, said the church has always been generous. They typically deliver one or two baskets a month, but during the pandemic, it was difficult to collect the offerings and buy the products for the baskets as they normally did. The situation became even more complicated because the church building was closed for almost nine months.

There were many needs in the congregation and the community. Many businesses had to close and people lost their jobs. Others had their wages reduced, and some were infected with the virus.

According to Guevara, offerings of money and food began to arrive to support families in need, both from the congregation and from outside the church.

"Just like the miracle of the loaves and fishes, the baskets abounded and satisfied the hunger of many families, and they continue to do so," Guevara said.

From April 2020 to May 2021, more than twice the normal number of baskets were delivered, a total of 53. Guevara said each basket was a gift from God that allowed them not only to bless many families but also to introduce them to a God who cares for them and to the church that loves them, walks alongside them, and prays and cares about them.

“Today we are more and stronger,” Guevara said. “God is with us and has touched lives through the miracle of His providence. For this reason, we are living witnesses of His precious promise: ‘And God is able to bless you abundantly, so that in all things at all times, having all that you need, you will abound in every good work.' 2 Corinthians 9:8."

People, such as the father of the Fallas Alvarado family, also gave their lives to Jesus due to the impact of the Canasta de Amor ministry. The family’s mother shared her gratitude to the church for this initiative during this difficult year when her husband lost his job.

"When we received the basket of love at our door, my husband was so surprised to see how people he did not know were supporting us in such difficult times," she said. "That was how, after being away from God for a long-time, he wanted to be part of this wonderful church family. Thank you, because it has been a beautiful miracle to see my husband so constant and persevering in wanting to continue in God's ways.”