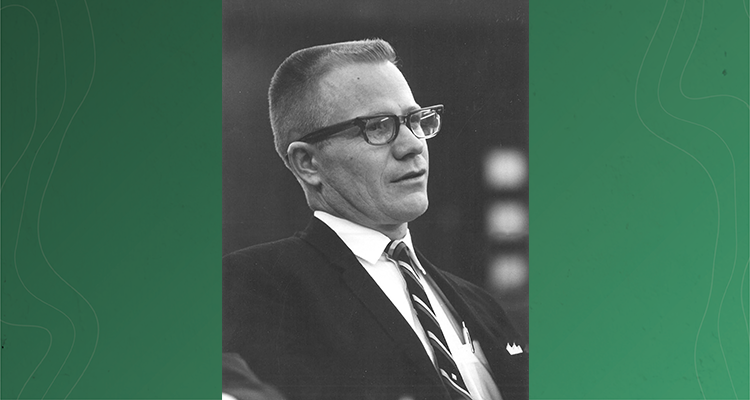 Wilbur "Wil" Spaite, 91, of Chandler, Arizona, passed away 23 August 2022. He was a retired district superintendent who led the Central California District for 20 years from 1979 to 1999.

At age 12, Wil went to Yosemite National Park with a friend’s family. While viewing the valley, with its cliffs and cascading waterfalls, he became keenly aware of the presence of God. Two weeks later, he opened his heart to Jesus, surrounded by 12 men at the altar of Bresee Avenue Church of the Nazarene in Pasadena, California.

Wil met and married Pauline “Pollie” Parker at Pasadena College (now Point Loma Nazarene University) in 1951. While there, they oversaw the “House of Perpetual Horseplay” (the freshman men’s dorm). He also played tennis at the college, where he won many tournament championships as James Dobson’s doubles partner.

After college, Wil enlisted in the Air Force and was stationed in Goose Bay, Labrador, for a year. The Spaites then moved to Arizona and were stationed at Williams Air Force Base. While there, Wil volunteered in youth ministry at Chandler First Church (where he would later pastor) and sensed his call to preach.

Wil graduated from Nazarene Theological Seminary in 1960 and pastored in Deer Valley, Arizona (1960-1965), Chandler, Arizona (1965-1970), and Porterville, California (1970-1979). He received his Doctor of Ministry degree from Fuller Seminary after being elected district superintendent of the Central California District in 1979.

Wil served eight years on the General Nazarene Youth International Council, helping develop World Youth Conference and creating Regional Activity Days at PLNU (now known as Elevate). Serving on the Board of Trustees at Pasadena College, he actively supported Shelburne Brown’s vision to move the college to San Diego. During his many years on the Pasadena/Point Loma Board, he counted it a privilege to serve as its chair from 1987 to 1993.

At the denominational level, Wil was a member of the NTS board for 16 years (five years as chair). He was nominated by the Board of General Superintendents to serve as the denomination’s general secretary but declined, sensing a continuing calling to the superintendency of the Central California District.

Wil was elected as chair of the World Missions Committee of the General Board. He found great fulfillment in interviewing missionary candidates and receiving exciting reports about what God was accomplishing globally.

After retiring as district superintendent, Wil continued to minister on staff at Oro Valley and CrossRoads churches in Arizona and served as “pastor” to the residents in his retirement community, leading a weekly Bible study.

He was preceded in death by his wife, Pauline Spaite.

Wil is survived by his three children, Dave and Kristi Spaite, Dan and Dana Spaite, and Judi and Victor Labenske, and six grandchildren and one great-grandchild.

His memorial service is scheduled for Saturday, 15 October 2022 at 10:30 a.m. at Chandler Crossroads Church, where he served as pastor emeritus.