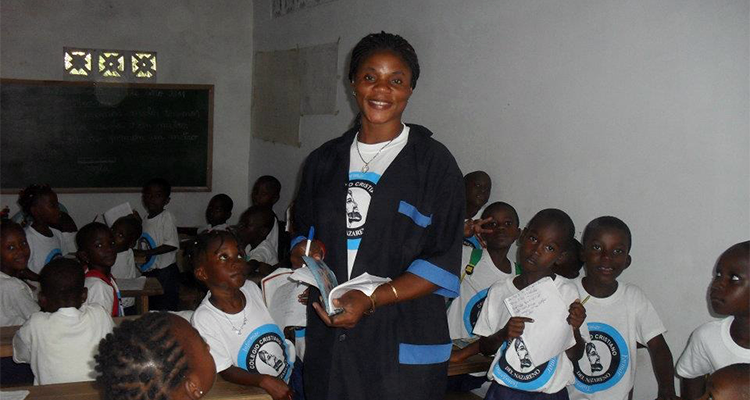 One of the Nazarene Schools in Equatorial Guinea

Mario and Irma Martinez had been faithfully serving the Lord for many years in Argentina when they began to feel restless. Mario had already served in numerous roles, including as a pastor, faculty member at Nazarene Theological Seminary–Southern Cone, and as a district superintendent, all at a young age.

“I was the youngest elder on the district, the youngest DS, the youngest everything,” Mario said. “The Lord was moving us very fast, but that was also something that generated a crisis in our lives. We were still very young, and we did not want to finish our best years behind a desk.”

The “unrest” started to affect Mario, and he shared that feeling with his wife, Irma. She had felt a call to missions, specifically Africa, at a young age and was beginning to wonder if that would ever become reality.

“In my heart, I was wondering, ‘When is the time to go and serve Him?’” Irma said. “God has His timing though. He was training us, because the places we were going to go were not going to be easy.”

They had heard about the African nation of Equatorial Guinea because it was a place the Church wanted to send missionaries. They approached then Regional Director Bruno Radi and World Missions Director Louie Bustle to discuss the opportunity and were officially sent in 2002 to establish the Church of the Nazarene in the last Spanish-speaking nation without a Nazarene presence.

“We arrived in a country where nobody knew us,” Mario said. “Nobody was waiting for us [there], but the conviction of God was calling us to that country.”

Mario and Irma started the church in Equatorial Guinea in their living room, inviting families and working to make connections with the children.

“There’s a reason why the Early Church was born out of the homes,” Mario said. “It’s a model you can take into any country.”

They didn’t have a car for the first two years, so they built relationships with people they would see while walking. By bringing the gospel into people’s homes through relationships with their neighbors and showing the JESUS film, they were able to spread the Word of God.

“A young person in our community received Christ, and he said that he wanted his people to watch the JESUS film in the Fang dialect,” Mario said. “The village was 150 kilometers (conversion) away, and his family received Christ. The Lord opened the doors out of that, and a congregation was born in that village.”

Two of the young people the Martinezes mentored, Daniel and Mercedes Ncuna, had grown in their faith and felt called to ministry before they even started dating. The Martinezes had the privilege of marrying them, and as the couple began to travel around the country and share the gospel together, Mario knew they needed a formal education. Because there was no Spanish-speaking seminary in Africa, the Ncunas needed to go to a seminary in Latin America.

Thanks to his past connections, Mario was able to get Daniel and Mercedes to Argentina to study at NTS-Southern Cone. After completing their degrees, Daniel was appointed the first district superintendent of Equatorial Guinea in 2013. The relationship between Martinez, Ncuna, and NTS–Southern Cone has helped create a borderless education initiative that continues to prepare the next generation of leaders for the Nazarene church in that country.

Over the last 20 years, the Martinezes stepped out in faith multiple times to make a way for these projects.

“You can look at a piece of land and you can see what’s there,” Mario said. “But with faith in God, you [can] say, ‘This is a school. I see children studying, playing, and being transformed. And these are the children who will be part of the church in the future.’ That’s the difference faith can make. You can see something normal and say ‘It’s just a piece of land.’ But with faith, you say, ‘This is what we have, and more.’”