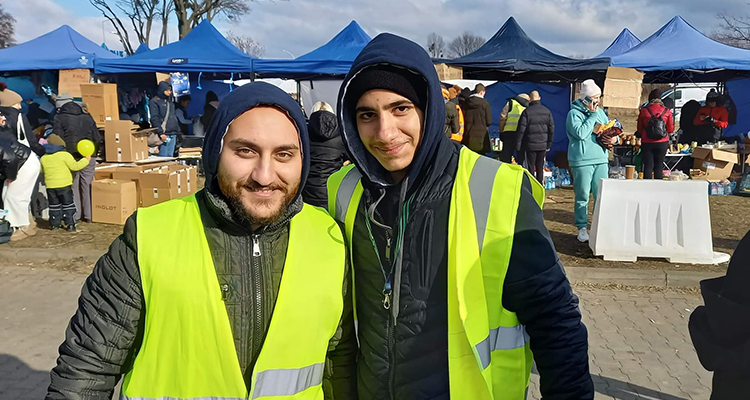 Even though more than a million people have already fled the country, hundreds of thousands are still vulnerable in Ukraine as the Russian Army continues to advance. Meanwhile, Nazarene churches and leaders are showing compassion and hospitality to communicate the presence of God in a time of upheaval.

As the crisis escalates in Ukraine, workers in the Church of the Nazarene there are seeking shelter for their own families while they also work for the safety and provision of others. Pastor Nabil of Odessa is housing refugees in both the church and his family’s home. Andriy, a pastor in Kyiv, has helped coordinate deliveries of food and supplies, such as diapers, to single mothers and children. Pastor Sergei is making continuous trips to the border, transporting refugees while navigating volatile areas. Pastor Svetlana is caring for her congregation that consists largely of disabled members, delivering food and seeing to their basic needs.

Nazarene workers in neighboring countries are also ministering in creative ways. Leaders in Moldova, Hungary, Romania, and Poland are helping at the border, translating, making food, and creating space for refugees in their homes.

Rafi Habib is a pastor and the coordinator of Nazarene Compassionate Ministries in Poland. Originally from Syria, Rafi and his family became refugees seven years ago when they were forced to flee conflict in their home country. After arriving in Poland, Rafi and his mother, Lena, planted two Arabic-speaking Nazarene churches. Now, he is at the border welcoming Ukrainian refugees with food, water, supplies, and a warm smile.

This week, Teanna and Jay Sunberg—Nazarene missionaries on the Central Europe Field—went to a border city in Poland where refugees are arriving from Ukraine. Teanna describes the web of compassion she and other responders witness by telling the story of a Ukrainian woman named *Sveta.

In a harrowing journey that involved an automobile breakdown, hospitality from strangers, and text messages spanning multiple countries and continents, Sveta finally found a place of refuge in Hungary. In 90 minutes, Teanna says, eight strangers communicated through a network representing four missional organizations across four countries and two continents. Sveta secured a place to stay in another country before she even reached the border.

Teanna shares this story to describe what Christ-centered crisis response looks like in the 21st century.

“It looks like people of all backgrounds and skill sets and ethnicities prioritizing an act of love and welcome,” says Teanna.

The church will continue to respond to the ongoing crisis in the days, weeks, and months to come. See an interview that Ukraine District Superintendent Volodymyr Masyuk and his wife, Sylvia Cortez, shared on NBC’s Today show here. View updates about the work of the church in Ukraine and at the border by following Nazarene Compassionate Ministries on Facebook, Twitter, and Instagram.

*Name is changed for protection.

How you can help

Please pray for people experiencing firsthand the crisis in Eastern Europe. Pray for those seeking shelter within Ukraine, those relocating to other countries, and those grieving the losses they have already suffered. Pray for those who are most vulnerable, including children, senior adults, individuals with disabilities, and those with health conditions who need medication. Pray for church leaders and churches responding to the needs around them. Ultimately, let us pray for peace. To send a prayer or note of encouragement, go to ncm.org/pray.

Churches and individuals around the world can provide support through the NCM Ukraine Crisis Response Fund – Eurasia Region. Donations will go toward emergency support associated with transportation, shelter, food, water, and essential supplies. To support churches as they care for people within Ukraine and those traveling from Ukraine to neighboring countries, give today: ncm.org/Ukraine.

Church of the Nazarene

Church of the Nazarene Canada

For any other country, give through your local church or district, designating your gift to NCM Ukraine Crisis Response Fund – Eurasia Region.