‘I Have a Name’ brings dignity to homeless in Kansas City

‘I Have a Name’ brings dignity to homeless in Kansas City 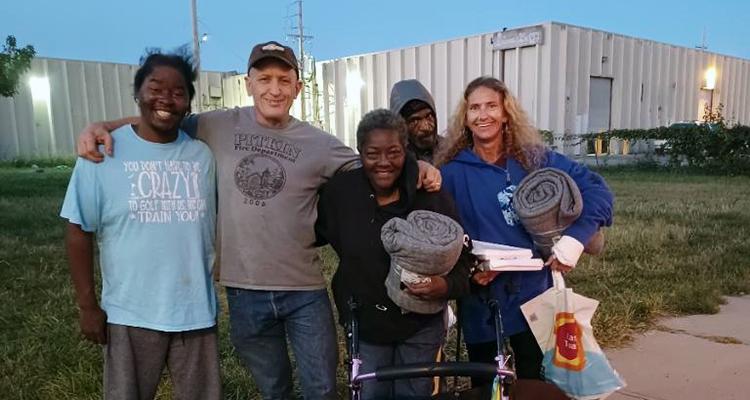 Don Pardew (second from left), and a group of people he visits weekly.

More than four times a week, Don Pardew makes his way out into the various homeless encampments in Kansas City, Missouri. He brings food, blankets, propane heaters, coats, and more to hand out through his ministry, I Have a Name or I.H.A.N.

Pardew’s efforts began during the COVID-19 pandemic when he would see homeless on the street corners with signs asking for money. He began to ask himself, “What’s their name? What’s their story?”

While his efforts started as an individual endeavor, the support of his church, Nall Avenue Church of the Nazarene in Mission, Kansas, has allowed him to grow the ministry into something more significant.

Pardew will go out on Mondays and Tuesdays into the homeless camps near downtown Kansas City, check the residents’ health and safety, take inventory of needs, and maybe even bring a few snacks.

On Wednesdays after work, Pardew stops by the church’s kitchen to pick up roughly 30-40 hot meals that have been donated and hand-prepared by multiple volunteers from the congregation. On Fridays, he takes inventory again before spending most of Saturday distributing necessities like coats, gloves, stocking caps, and hygienic items to various camps along with a group of volunteers from the church.

Pardew’s curiosity and empathy stem from his own story. He experienced homelessness at the age of 10, sleeping behind a dumpster to escape his abusive home life. As an adult, he battled drug addiction for nearly 25 years. Now that he’s past his darkest days, he’s now using that past to connect to people.

Pardew believes names are powerful when creating a connection.

“When you see how important it is to them, they do a double take and look, and you can tell they’re thinking, ‘That’s my family. They recognize me. They know me,’” Pardew said.

Pardew, a mechanical contractor for P-1 Group, was nominated to represent his district for the company’s annual community service award. Pardew and I.H.A.N. won, receiving a hefty donation to the ministry and recognition for his efforts to help restore dignity and rehumanize the homeless in Kansas City.

Too often, Pardew feels that people suffering from homelessness and addiction are swept under the rug. In obedience to God’s call, Pardew tries to create more personal relationships and restore the person’s dignity before attempting to get him or her to give up destructive habits.

“You can’t force somebody to change, and most people out there, if you force them to change, they’ll dig a deeper hole,” Pardew said.

“The real solution is getting them to understand they have an identity, a purpose in our society, and that they are people who deserve good things. Once they start looking at themselves in that light, they start to change.”