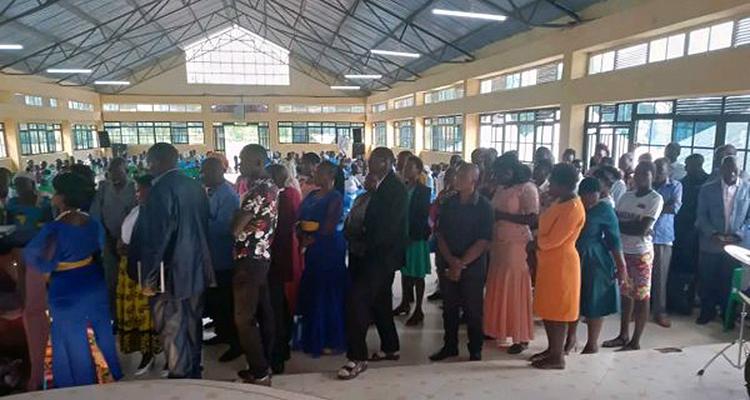 During Holy Week on the Lake Victoria District of Kenya, churches celebrated many events, including baptisms, the reception of new members, the organization of churches, and the dedication of church buildings. District Superintendent Fredrick Amolo took Africa East Field Strategy Coordinator Musa Kunene on a tour of the district, visiting its eight zones.

At Bright Day Church of the Nazarene, it was a three-in-one occasion. Bright Day, in the Rongo area of the Lake Victoria District, started as a preaching point in the home of George Caleb Oguta, who is a member. The church had multiplied so much that George’s house became too small in one year.

Because of the rapid growth, he bought a piece of land and started building a hall, which he said would be used for community gatherings. When the hall was complete, he moved the church services there.

When Amolo and Kunene met George on Easter Monday to express gratitude, he responded, “My calling is not to preach or pastor a church but to be generous. What I have done is what God has called me to do.”

George built the church hall in honor of his father, who had brought the Church of the Nazarene to the area.

In each zone throughout the rest of the trip, Musa and his wife, Prudence Kunene, were met by pastors, local leaders, and other members. Musa brought a message of encouragement related to the Africa East Field theme, “Together for the local church,” which places the local church as the epicenter of the field’s mission. Amolo translates this theme into Swahili as “Mission Mashinani,” emphasizing the local church. The Swahili word “mashinani” means “the grassroots.”

In each zone, the leaders had a two-hour celebration where the FSC thanked the people for choosing the Church of the Nazarene as well as urging them to be strong Nazarenes, being filled with the Spirit, and serving God and the church with their spiritual gifts.