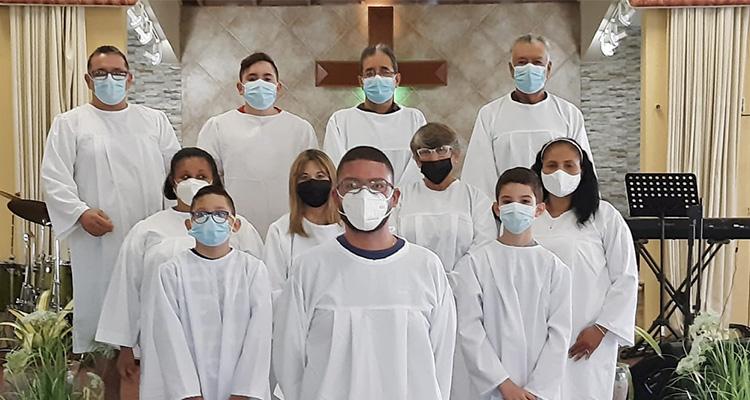 The Church of the Nazarene in Aguadilla, Puerto Rico, held a celebration during Holy Week that included two special services and the baptism of 11 people.

Pastor Oscar Rivera said the services were special and emotional because they were the first meetings in more than two years. Previously, restrictions during the COVID-19 pandemic prohibited the church from carrying out celebrations that involved large gatherings.

“The temple was full,” Rivera said. Both church members and guests attended the celebrations, many for the first time.

Marta González, superintendent of the Western District of Puerto Rico, said that Rivera was previously pastoring in the city of Miami, Florida. When he moved to Puerto Rico, he worked hard for a few years to raise up the ministry in Aguadilla.

The celebration services included praise songs, a skit, testimonies from various church members, the baptism of 11 people, and Holy Communion as well as a sermon on Jesus' last words, "It is finished."

“All of us who attended were able to experience in our spirit the imminent presence of the Holy Spirit,” Rivera said. “The atmosphere was jubilant…tears ran down the faces of many brothers, and they spontaneously raised their hands to heaven in praise and exclaimed at the top of their voices, 'Hallelujah, glory to God!’”

Rivera said that one of the most beautiful moments of the service was after the baptism when the 11 baptized individuals walked through the central aisle towards the pulpit dressed in white linen robes. One by one, Rivera introduced the new brothers and sisters in Christ while the congregation received them with a standing ovation and expressions of joy and praise to God.

Those that were baptized included Rivera's two sons as well.

"Although the reception of these brothers in the church was a simple celebration, it did not fail to remind us of the resemblance it will have with the sublime day of the return of our Savior and King and the marriage of the Lamb," Rivera said.