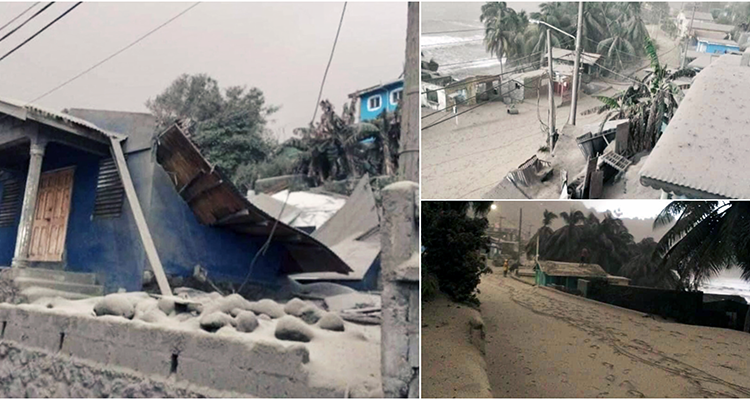 Ash covers St. Vincent after the explosive eruption of the La Soufriere Volcano.

Saint Vincent and the Grenadines experienced an explosive eruption on the morning of 9 April 2021 at the La Soufriere Volcano in the north of the main island.

Ash plumes were sent miles into the air, and since then, ashfall has been constant, severe, and overwhelming. One person died from suffocation in Georgetown, and a church in Owia and several houses have collapsed under the weight of the ash.

People who had remained in the red hazard zone after the initial evacuation order by Prime Minister Ralph Gonsalves on 8 April were asked to evacuate immediately following the explosive eruption on the 9th. The islands of Saint Lucia, Grenada, and Barbados have already indicated their willingness to accommodate up to 20,000 evacuees should the crisis intensify.

On 10 April, additional explosions continued throughout the day, which further increased ash venting and resulted in a thick blanket of ash covering the entire mainland of Saint Vincent. Some of this ash was disbursed to the neighboring islands, particularly Saint Lucia and Barbados.

Scientists believe that the La Soufriere volcano is very likely only just getting started. They have indicated that the data points to the very real possibility that Saint Vincent and the Grenadines will experience further seismic unrest over the course of the next few days and weeks.

Nazarene Compassionate Ministries on the Caribbean Field has been responding to the disaster from the onset. Emergency supplies of food, water, care packets, and other items have been steadily distributed to shelters thus far. Response efforts will be upscaled over the coming days as funds received from the regional NCM Office will be used to increase the emergency supplies and to bring much-needed relief to evacuees.

“We are trying to do what’s necessary and bring hope,” Kelron told Christianity Today. “We want to do that by sharing the gospel, but we also hope they see it in us as we extend a hand of compassion to them.”

Kelron told Christianity Today he has seen God’s grace through so many people as they stepped up and helped one another.

“I’m seeing the goodness of people coming out,” Kelron said. “Many persons who are searching, who are looking for hope, they’ll see it too. Despite the volcano, despite the COVID-19 pandemic, God is still at work.”

Saint Vincent and the Grenadines continue to grapple with the ongoing challenges of the economic downturn and the COVID-19 pandemic in addition to the expected protracted eruption of the La Soufriere Volcano.

Churches and individuals around the world can provide support through the Saint Vincent Volcano Relief Fund. Donations will be used for immediate needs, such as water and food, as well as long-term recovery and rebuilding efforts.

For any other country, give through your local church or district, designating your gift to Saint Vincent Volcano Relief.